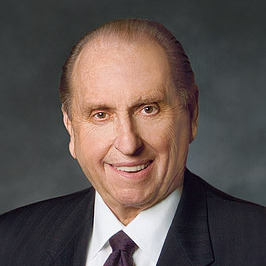 Thomas S. Monson
PRESIDENT THOMAS S. MONSON has served as the sixteenth President of The Church of Jesus Christ of Latter-day Saints since 2008. He was called as an Apostle in 1963 at the age of thirty-six. After serving as second counselor to President Ezra Taft Benson and then President Howard W. Hunter, he served as first counselor to President Gordon B. Hinckley from 1995 to 2008. Thomas Spencer Monson was born to G. Spencer and Gladys Condie Monson on August 21, 1927, in Salt Lake City. Following his service in the U.S. Navy near the close of World War II, he graduated cum laude from the University of Utah and earned an MBA from Brigham Young University. He had a distinguished career in the publishing industry. He served as president of the Canadian Mission from 1959 to 1962 and was a member of several general Church committees before becoming an Apostle. He married Frances Beverly Johnson in the Salt Lake Temple in 1948. They are the parents of two sons and one daughter. They have eight grandchildren and seven great-grandchildren.
Books of Thomas S. Monson Read more
One Little Match
About This Book
Overview

The perfect read-aloud to teach young children the danger of playing with matches. Award-winning author Thomas S. Monson and renowned illustrator Dan Burr have teamed up in this powerful story about choice and consequence that will leave a lasting impression on young minds. Based on a true story from the author’s childhood, readers will learn an invaluable lesson of what happened when little Tommy made a poor choice that nearly burned down a forest.