Chad Morris
Chad Morris grew up wanting to become a professional basketball player or a rock star. Neither of those plans quite panned out, so he wrote and performed sketch comedy while going to college. Now he’s a teacher and a writer.
Books of Chad Morris Read more
Willa and the Whale 2020 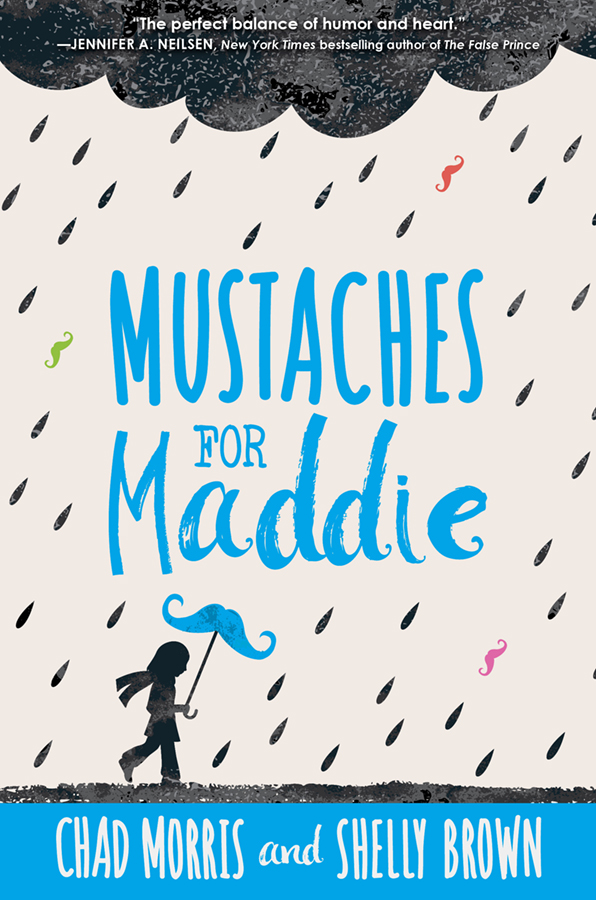 Shelly Brown
Shelly Brown loves to write books for children. In her spare time, she enjoys the theater and traveling. In addition to her five children, she has six chickens and sixty-four Pez dispensers.
Books of Shelly Brown

Read more
Willa and the Whale 2020

Read more
Mustaches for Maddie 2017
About This Book
Overview

Based on a true story.

Maddie is a normal twelve-year-old girl. Well, except for the fake mustaches she carries in her pocket. She likes to make people laugh and slapping on a mustache, especially a fuzzy pink or neon green one, always gets a smile. Maddie hopes that the class queen, Cassie, will find her mustaches as funny as she does and want to play with her at recess. She’s been self-conscious lately because her right arm only feels normal when it’s curled against her chest and she’s constantly tripping over her feet. But that’s probably just part of growing up and not something weird, right?

When Maddie’s arm continues to bother her, her parents take her to a doctor who gives them a shocking diagnosis: the cause of the abnormal behavior of her limbs is a brain tumor and she must have surgery to remove it. She’s understandably afraid as he describes the procedure, but knows she must find a way to be brave and must face her fears–all of them–at the hospital, at home and at school.

She will need all of her courage not only to face her illness, but also to face Cassie at school. Both Cassie and Maddie are auditioning for the same role in the school play, but when Cassie accuses Maddie of lying about her tumor in order to get attention, Cassie’s bossiness turns into bullying.  And as Maddie’s surgery approaches, she begins to worry more and more about the outcome. What if something goes wrong? What if the doctors don’t get all the tumor out of her brain? What will happen to her family? What will happen to her?

It will take all of Maddie’s vibrant imagination, a lot of kindness-both given and received-and of course, the perfect mustache to overcome the tough stuff ahead of her.”

Meet the Author: Chad Morris and Shelly Brown are the proud parents of five children-four sons and one daughter, Maddie. When Maddie was nine years old, she was diagnosed with a brain tumor. Her positive outlook, imagination, and courage in the face of such a challenge was an inspiration to her friends and family–and provided the basis for this novel. Maddie collected mustaches during her illness and still finds humor in them today.

Chad grew up wanting to become a professional basketball player or a rock star. Neither of those plans quite panned out, so after high school, he left the Rocky Mountains to live in Brazil for a few years. When he returned home, he wrote and performed sketch comedy while going to college. He graduated from Brigham Young University and became a teacher and a writer.

Shelly has always loved children and books so when she started writing, it seemed natural to write books for children. In her spare time, she loves the theater and traveling. She is also one of the worst tap dancers you will ever meet, but she does it anyway. In addition to her five children, she has three chickens and sixty-four Pez dispensers.