Return to the world of devoted working dogs and the humans they love in a new book from the best-selling author of Stella.

A boy and his dog learn that they are better together.

Gus is a livestock guardian dog with one job—protecting his farm from coyotes and foxes. He likes keeping the sheep, the chickens, and his humans safe, and he’s very good at it.

One day, Diego and his dad come to visit the farm, and Gus immediately connects to the small boy. They both like to sit still and enjoy the quiet, and Gus can tell that Diego likes being around a gentle giant of a dog, that it helps relieve the boy’s constant worry.

When Gus detects the scent of a bear in the woods, he rushes to protect his flock, injuring his leg in a fight with the dangerous beast. Wounded, Gus needs to rest and heal away from his sheep, so he doesn’t risk reinjuring his leg. Diego suggests Gus come home with them to the North Carolina coast.

Suddenly, Gus is thrust into a new world of saltwater and sand and neighbors who don’t appreciate the presence of a large guard dog, like the neighbor who reminds Gus of his first owner—the junkyard man with the heavy boots.

Gus realizes Diego might need a friend as much as his sheep need a protector, but if he can’t learn to control his instincts, like barking and patrolling the neighborhood, Gus might lose his chance to stay in his new home. If he can’t protect the farm or his boy, Gus worries he might never find his place in the world.

Just Gus is a tender story of belonging and of two friends who learn they are better together than they were alone. 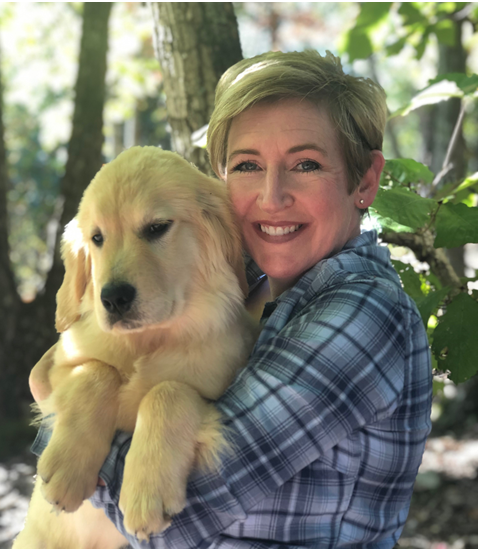 McCall Hoyle
McCall Hoyle is the award-winning author and an ALA Schneider Family Book Award finalist. McCall is a sixth-grade language arts teacher in one of the largest school systems in Georgia. She has a wide circle of influencers in the middle grades, including teachers and librarians. In addition to teaching middle grade readers, she presents regularly at local schools. McCall has also presented at the National Council of Teachers of English, The American Library Association, and BookCon. She enjoys meeting teachers, librarians, parents, and readers and interacts with them regularly on social media.